I met Tugi the same day I met Ricky, at an SPI networking event. I just finished reading a book about networking, and it suggested rather than simply going to networking events – you should become an organizer for events yourself. I saw Tugi taking pictures of the event. I knew he was one of the organizers and I had a good feeling about this SPI group, so I just went for it and asked if I could help out.
Tugi was friendly from the very beginning. Over time I’ve come to know that that’s just the way he is. He has this constant relaxed demeanor and is quick to give you a smile. 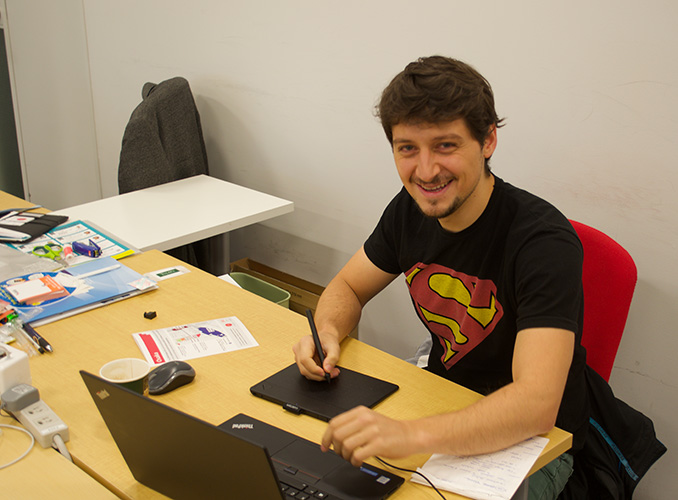 Stop smiling and get back to work Tugi.
Where did you grow up?
Born in Switzerland to a Turkish family and raised in a rural village in the German speaking part of Switzerland. It’s a very small village of about 2000 people but well located between the major cities Zurich, Basel and Bern. My parents are from Turkey and spent their youth there, so I grew up between two cultures, which turned out to be good and sometimes bad. I was exposed to the Swiss culture with my friends at school, and the Turkish culture with family and other friends. Whereas I see some people tend to end up with one or the other, I kind of made my way through both. It opened up a lot of opportunities for me, in the sense of you get an understanding of different viewpoints and different cultures, and different peoples reasoning for certain actions. That was a cool thing, to see and live two very different mindsets.
Is it common to be multi-cultural in Switzerland?
Well, if you look at Switzerland, it’s between borders of Germany, Austria, Italy, France.. I hope I’m not leaving out anyone (Edit: he left out Liechtenstein). So already, you have quite a cross over mix where even the Swiss national language is not 1 but 4 languages. So we have German speakers as the majority with 60%, French speakers with about 25%, and then we have a minority of Italian speaking people, and a very very low amount of Romansh speakers. You might have to look that up haha. The fun thing though is that the Swiss government still features all the languages, and they even have a super small special language tv programs. In that sense, Switzerland has always been a cross-over of different things. There are also a lot of refugees from various regions. When I was growing up, we had quite an influx of Balkan people in my region – from Turkey, Albania, Kosovo, Serbia – for various reasons. In my case, it was my grandpa who moved to Switzerland for work reasons. 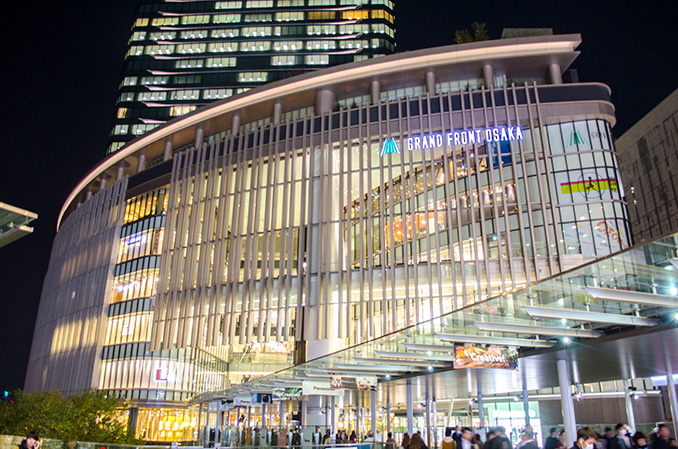 Grand Front Osaka, where Tugi works, stands as a symbol of Osaka’s push for innovation – full of stores with the latest technology from Japanese companies, as well as several initiatives to spark Kansai entrepreneurship.
What languages do you speak?
I consider German as my native language. Then we have the Swiss German. I don’t know if you can count it as an individual language but it is very distinct. Switzerland has many dialects, depending on the cities and region you are in, they change. It took some study friends from Germany like 3 to 4 months to fully understand us. As the second biggest official language is French, of course we had to learn that at school too. In the German part of Switzerland you learn French. The native French speaking Swiss learn German. I should technically be able to speak in French. It’s somewhere up there in my brain, but I never practice that much. But it’s there.
Due to my background and family, I also know basic Turkish. Daily talks, no problem. Sophisticated talks, I can understand, but not respond on the same level. And obviously English, through school, movies, games. That’s more or less it.
And well.. Nihongo.. mm not really, but eventually hopefully haha.
What feelings led you to wanting to leave Switzerland?
One of the reasons was because you grow up in this one area, you only see one thing. Switzerland is not that big although we have a lot of cultural differences. It’s still Switzerland. At some point you think maybe I should see something else. I was also told by companies I was applying to like “Oh, we like you’re background and this and that, but you kind of lack foreign experience.” I said well let’s do that. I also had other motivations, and I’ve had some experience before in Japan as a tourist. Plus growing up in the 80s and 90s, there’s no way around companies like Nintendo and the anime culture. You had this Japan is everywhere already. I had some connections here in Kyoto from before, and through that I made my decision to come here. What made it easy besides the connections is that the mindset and the infrastructure in Japan is not too different from the ones in Switzerland. It sounds weird, but what I mean is that everything is clean, everything is even more safe here in Japan, the infrastructure is set, things are working, trains are on time and so on. Even some aspects of the society are similar, but you can find similarities everywhere – that’s too much to assume. The culture is totally different though.
Maybe I’ve been just around the certain people, but I feel like Swiss people are also more private, a bit more.. How can I put it in words.. It’s difficult to get to them. I heard that before from other people. Meeting and making friends with Swiss people is difficult sometimes. Once you’re there, you can get really super close friends and whatever. You see it’s similar here as well.
It’s totally different if you go to Germany or France or some other places in Europe. People are much more straight forward.
What did you study in school?
Throughout basic education, primary school, and all that, I always had an interest for science. I was not sure what to study then, after what you call high school – the system is bit different in Switzerland. So I started with mechanical engineering. Pretty soon I realized, although the topic interested me, the craft itself was not my thing. So I jumped to the next thing that was really interesting to me which was biology. I studied biology for bachelors degree. Focused then on systems biology for my masters degree. I tried to get into some other things, but well that’s it for me with education for now. What do you do with a masters in biology – you either continue in research for a PhD, or you go into the pharmaceutical industries, banking, consulting – whoever’s hiring. Although biology is a very specific topic, the tools behind it like statistics and the general problem solving approach is very useful. 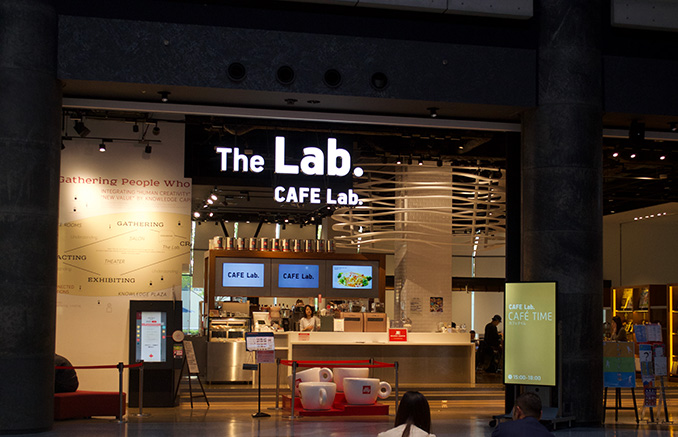 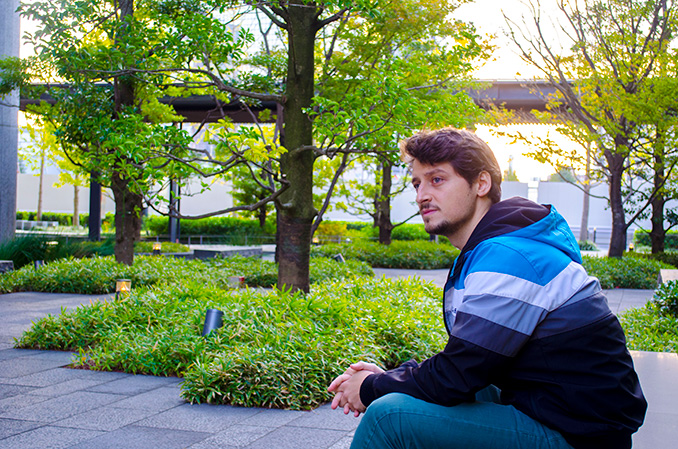 What do you think of entrepreneurship and startups in Japan and Kansai? 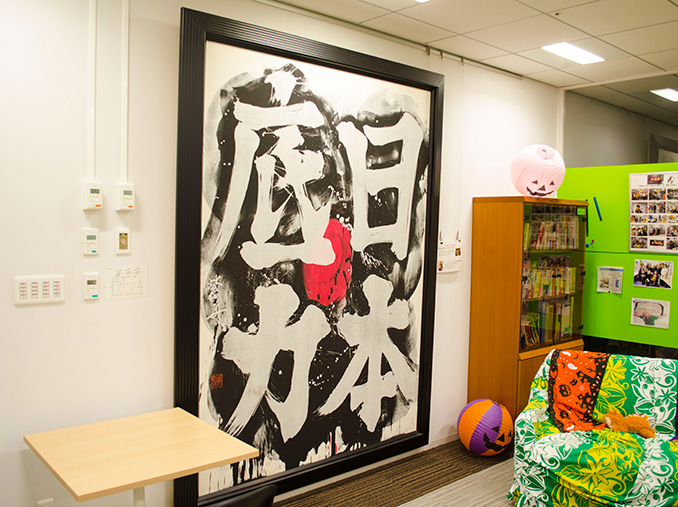 It’s all based on what you expect. If you of course come from Silicon Valley – everyone talks about Silicon Valley – you will be super disappointed. But the point is Japan is a totally different starting point then all the other places and you have to respect that. It’s not very developed. What I see is though many people are interested, there are people trying, but I feel especially in Kansai things are still very isolated. There are various groups, meetups, or individuals trying to do things, going to events, but they don’t speak to each other. Or at least the exchange is very limited to a few groups at the moment. Same for organizations. I see many co-working spaces, they do their own things, they have events, this and that, but they don’t speak to each other. They don’t learn from each other. They don’t connect or maybe create a network which could be beneficial to everyone. I would love to see more here, people in general exchanging more and everyone creating more activities. Especially from student organizations and individual entrepreneurs. That way the needs will be defined and approached by the concerned people. Bottom-up you know. You have a many companies and organizations approaching from the top, saying “oh I know what they need”, and providing some good content and support but often they don’t ask for what the people want and miss the point. The interaction is missing.

Ricky was talking about that a little bit. He was saying everybody’s doing their own thing. Everybody wants to be the leader, so they aren’t willing to work with other groups and communities. 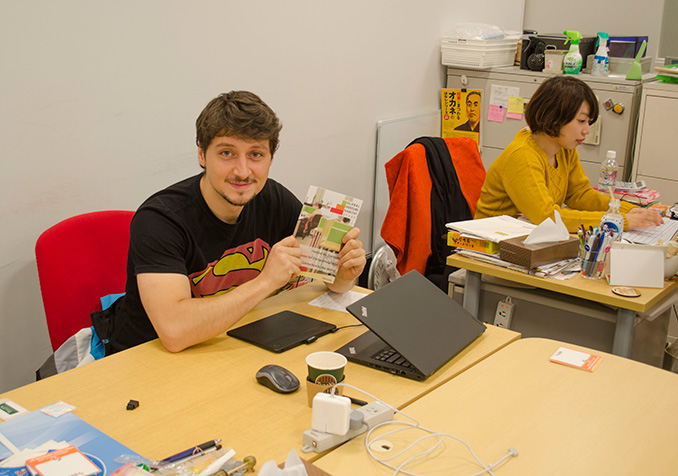 Tugi helps organize events with Sunbridge, and is always willing to help and participate in events by others as well.

You have to be open for that. That’s actually the fun thing about entrepreneurship, right. That’s where you get the creativity and ideas. Different people from different companies sharing their learnings. There are of course work related contents you cannot share and you have to be reasonable and such. But the exchange is very important – cross pollination you know.

Stay up to date